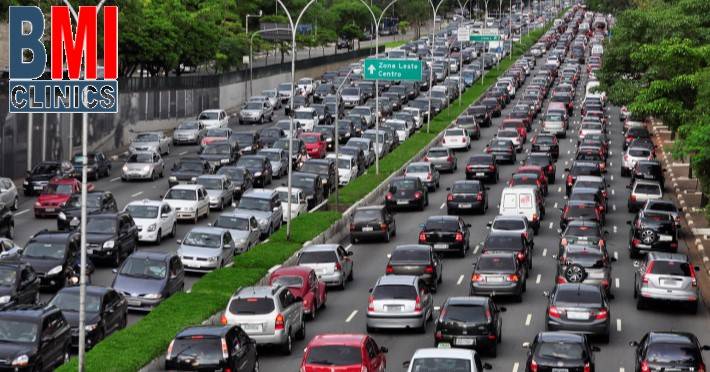 Have you ever asked yourself how traffic jams affect your health? If you haven’t then you should be concerned. An obvious fact is that we are living in a traffic-ridden time, specially in Lebanon. It appears that the number of cars in Beirut is increasing at a fast rate yet the roads still remain the same or expand slightly. This leads to you spending more time on the road, burning more fuel, and also causing more pollution. Yes it may seem like norm and many of us are accustomed to it. But, did you know traffic jams contribute to your bad health?

The following are some of the negative effects of traffic jams:

Did you know that many people get heart attacks while stuck in traffic? Also, did you know that rescuing such a person from the situation is more daunting if stuck on the road as compared to other situations? According to the American Heart Association, people are more likely to experience heart attacks while stuck in traffic. A study presented during the 49th Annual Cardiovascular Disease Epidemiology and Prevention Conference reveals that because of spending more time on the road, the heart attack risk increases 3.2 times. In addition to failing to notice the attack on time, saving a person is also hampered by limited movement.

Scientists and researchers have reason to believe that being stuck in traffic also increases the chances of brain-cell damage. During traffic, lots of exhaust fumes is produced and most of it doesn’t easily dissipate into the air. A study by Jiu-Chiuan Chen, a medical epidemiologist at the University of Southern California suggests that long-term exposure to the toxic fumes damages brain cells thus interfering with brain functioning. Exhaust fumes from vehicles contain carbon monoxide which is quite harmful to brain cells. It not only affects the healthy cells but also lowers the production of new and healthy cells.

Risk to the Unborn Child

If you are a pregnant woman who usually is stuck in traffic, then you should have reason for concern. According to Frederica Perera, a researcher at Columbia University, traffic jams expose an expectant mother to harmful fumes and pollutants endangering the child inside the womb. As the mother inhales the toxic fumes so does the unborn child. This may lead to the child suffering from mental conditions, respiratory problems, autism, and other diseases. Some of the symptoms that come with exposing the unborn child include limited intelligence, lower mental capacity, as well as emotional instability.

Many people seeking to know how traffic jams affect your health get shocked to realize that extended exposure also increases the risk of autism. Although today’s cars are more efficient than those manufactured in the 80s, 70s or earlier, the number of cars has grown tenfold. Annette Kirshner , a neurochemist at the National Institute of Environmental Health Sciences, North Carolina states today’s cars only generate a tenth of the pollutants produced by cars three decades ago. But the sheer volume of cars is the matter of concern. Constantly being stuck in jam, which has become norm especially in the big cities such as New York increases your likelihood of suffering from autism.

Many people get annoyed, angry, anxious, and irritated when held up in traffic. Some worry about getting to their destination late, others are fearful about the high consumption of fuel, while some get tired for waiting and staying at the same spot for too long. Road rage, irritability, and boredom also affect the driver as well as other occupants. Overtime, such effects may lead to depression, stress, anxiety and other related issues. This can affect a person mentally, physically, as well as emotionally. Researchers from Netherlands state that being in traffic for only 30 minutes can change a person’s behavior, and the most noticeable effect is stress.

From the above, it’s evident that traffic jams are not only an economic and social burden, but also a health concern. Unfortunately, many people are becoming used to it and pay little attention to what harm it does to their health. Reports from researchers from Harvard and Columbia who say the functioning of genes changes after being stuck in jam for 90 days. This probably explains why people overtime see the traffic snarl-up as part-and-parcel of life. In addition to understanding how traffic jams affect your health, it’s crucial to try to minimize the time spent in traffic.

If you are candidate for Weight Loss Surgery, and wish to know which surgery is best for you, fill out the Patient Questionnaire, and our team will help you decide.

GET OUR WEEKLY NEWSLETTER

All contents on Advanced BMI Website are the property of Dr Nagi Jean Safa and are protected by Copyright law under the Digital Millennium Copyright Act. It is strictly forbidden to use or reproduce any of these content without previous written approval by the author. Any infringement to this rule will be followed by legal action.